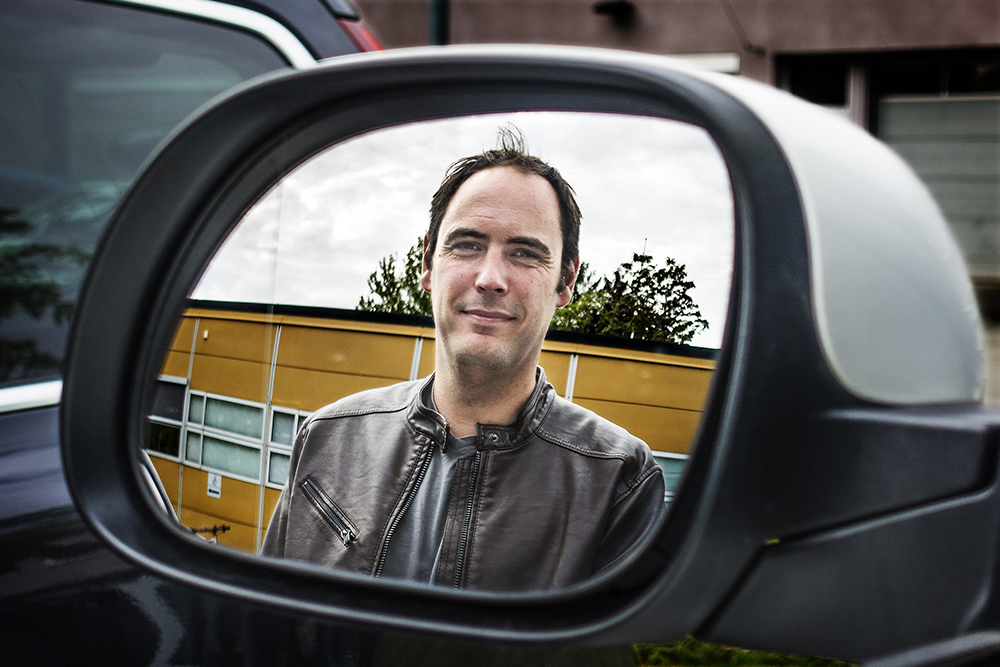 Imagine a Virtual Lab where physical crash tests are made history and test time is dramatically reduced. If you are a car manufacturer, savings could be hundreds of million euros a year.

This might sound too good to be true, but it is happening right now.

«It will be an enormous time-saving tool. Which means you can reduce the time from a new idea is born until it is fully tested, from 2 months to 24 hours».

Associated professor David Morin (34) heads SFI CASA’s Structural Joints Programme. Virtual Laboratory, or  «Virtual Lab for microstructure-based modelling and simulation of aluminium and steel structures», is one of CASAs main achievements. Together with professors Odd Sture Hopperstad and Tore Børvik, Morin presented status to CASA´s Board, Scientific Advisory Board and partners of the center.  The presentation was given 19 September during a seminar in Oslo.

He is confident they will prove that it works.

The Virtual Laboratory is still in the making. The idea is to obtain all  parameters required for the design of a structure from lower scale analyses, thus making physical tests superfluous.

It is a team effort, which involve each research programme of CASA. Several tools and different models go in, so it might be a bit too complex to have an impact in the short term. Still, Morin is convinced that this is a tool ready for commercial use within a few years.

To put this in perspective: Car manufacturers may run three car crashes on prototypes every day, six days a week, all year long. As each prototype costs between 0,5 and 1 million euros, this means potential savings of 300-500 million euros a year on virtual testing.

One of the messages is to make it clear that the input comes from the industry. The researchers are not the ones that do the innovation. In turn, CASA gives the partners the opportunity to execute their findings into new, better, cheaper and safer solutions that benefit all.

Where there is no interaction between research and industry, there is barren land for innovation, according to David Morin.

He picks up his smartphone: «If you think about this», he says, and points out the huge range of different skills that merged along the way before those tiny gadgets ended up in our pockets, invading our lives.

«I am left with only the fun parts»

«It is obvious. It is very difficult to achieve something, if you only have one field of competence. SFI CASA is research-based innovation, but I do not believe in innovation without interaction with industry».

While the classic professor spends his time between research, teaching, supervising and administration, Morin is stripped from the burden of the latter, and hence spends more time interacting with the partners.

«I am left with only the fun parts», he states.

A bit of French efficiency

He is of French origin, grew up in Compiegne north of Paris, and was educated at University of Valenciennes. In 2010 he was hired as a post doc. at CASAs forerunner SFI SIMLab.

«I defended my thesis in France on Friday 10 September. After the defence, I went straight back to my office and cleaned my desk. On the coming Monday I started work at CASA».

After another two weeks he went back and fetched his wife and daughter. They sold everything they had, and arrived in Trondheim with only a couple of suitcases.

«We were very efficient», he smiles.

The automotive industry has a tighter time frame than most of CASA’s partners. «There is always a question of time frames, the need to integrate news, they always have the next model on their drawing table. Unfortunately, this is not always compatible with research-based innovation. However, that is the game of the SFI», Morin says.

Five of the world´s leading car manufacturers are on board: Honda, Audi, Toyota, BMW and Renault. They compete mercilessly against each other, but they all share common interest in CASA’s research.

As Morin puts it: «They design cars, not joints or materials. We create the tools that all of them are using».

The aim is to provide them with macroscopic models for multi material connections, mainly involving aluminium, steel and fibre reinforced polymers. These models simulations are based on a fundamental understanding of the behavior of the joints but should, at the same time, be efficient in large-scale analyses. This combination of accuracy and efficiency is one of the challenges of the structural joints programme.

Effective work flow – a must

One example of CASA’s progress is the PhD project of Johan Kolstø Sønstabø. He both stayed and worked with Honda, who also co funded his project. Sønstabø defended his thesis on Flow Drill Screw (FDS) connections earlier this year. Now the outcome is used both by Renault and Toyota.

And the story goes on: PhD Mathias Reil, co-funded by BMW, is now working with self-piercing rivets combined with adhesive. John Fredrick Berntsen is funded by CASA, working with a thesis on structural bonding. In addition, post doc. Miguel Costas is studying the effects of the pre-hole on the strength of flow drill screw connections, as a continuity to Sønstabø´s PhD thesis. 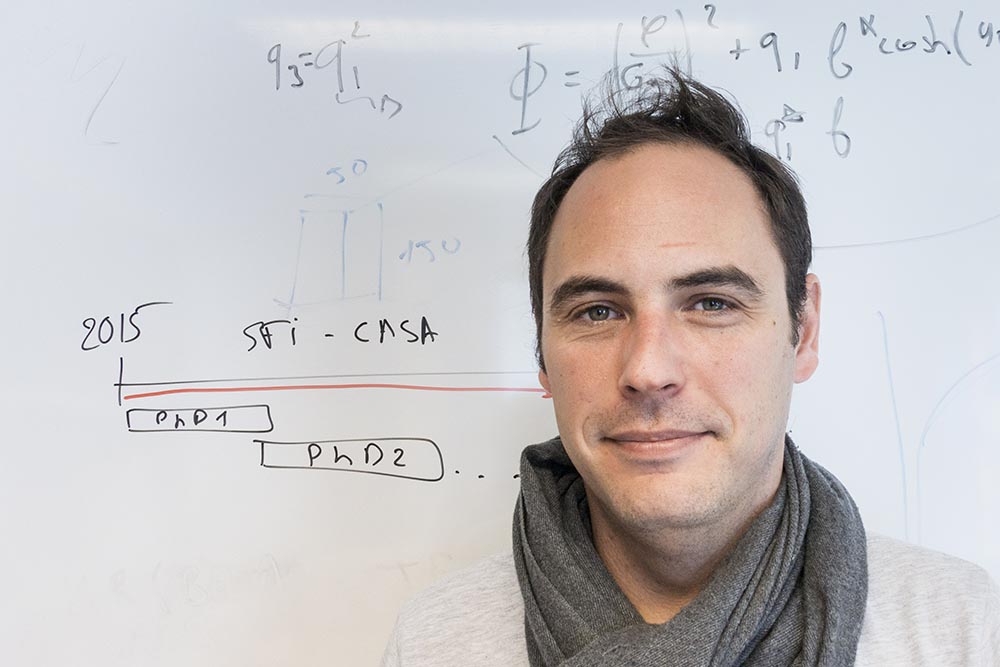 «Part of my job is to keep the perspective, to see the unique scientific contribution in each PhD project. It takes awareness, overview and careful planning». Photo: Sølvi W. Normannsen

David Morin grabs a marker and starts sketching on the whiteboard. Shows how one candidate uses another´s modelling techniques, while he himself provides his colleague with experimental data.

«CASA is an 8-year-long project. We see that the partners want results on a shorter term than that. To interact, cooperate, share data and modeling techniques like this is a way to give them findings faster».

He admits that it is a challenge. At the end of the day, there are separate PhDs defending separate theses, based on unique pieces of work.

«Part of my job is to keep the perspective, to see the unique scientific contribution in each project. It takes awareness, overview and careful planning», he says.

«The biggest issue, the most challenging part of my job?  To find time for my own research». He nods towards the calendar on his desktop screen.

On any given day, any given week, it is covered with appointments marked with light blue color. Only here and there a tiny, blank little spot.

But focusing on modelling of aluminium and prediction of failure within aluminium structures within 45 to 90 minutes time slots, is not a good idea. He knows.

«This is how academic life is, in general».

He has tried to compensate by working full time – in his spare time. But in the long run, that does not work very well either. Especially not when you are a family man with two daughters aged 6 and 9.

Since cars, at least the small parts and joints, play a crucial role in David Morins life, we are a bit curious about what kind of car he drives himself.

«None. I do not have a car. Actually, I do not even have a driver´s license»

Deprecated: Function get_magic_quotes_gpc() is deprecated in /customers/e/7/e/ntnutechzone.no/httpd.www/wp-includes/formatting.php on line 2443

The two main ways of producing silicon for...

Occupant behaviour in a zero emission dwelling may...

Towards higher energy efficiency in the power and...

Back to the future – Using yesterday’s energy,...

Industrial Reference Group in the Mould

All you need to know about buildings to...