Travelling Tanzania with a generator

Will a program about ecosystems and ecosystem services affect the views or be of any interest to people living in the Serengeti-Mara-ecosystem? This is what I am investigating in my master’s thesis, conducted as a part of the EU-project AfricanBioServices. These are some of the experiences from the road.

From the day I started with my studies, the thought of writing a master’s thesis have been somehow hard to imagine. Mostly I have been worried about finding a project that would keep my interest for all those 6 months. Ironically, it now seems that the master thesis might become the most interesting, challenging and exciting part of the whole study, as it has brought me all the way to Tanzania!

My name is Hanne Marstrand Andersen, and I am now in my fifth and final year in the study of becoming a teacher in biology and mathematics, doing my master thesis in ecology. I have also for a long time had interest in the life and culture of Africa, and this was the reasons I found out about Eivin Røskaft.

Eivin Røskaft is professor at NTNU, and have been working on different projects in Tanzania for almost 30 years. Now he is the main coordinator of the project AfricanBioServices. This project aims to find the links between biodiversity and human well-being in the Serengeti-Mara-ecosystem, regarding climate change, population growth and land use. Through this research, they hope to find sustainable solutions for the future in this very area

After some e-mails to Eivin, we had a meeting, then another one, and slowly by slowly it became clear that I was going to Tanzania to conduct the research for the master’s thesis. 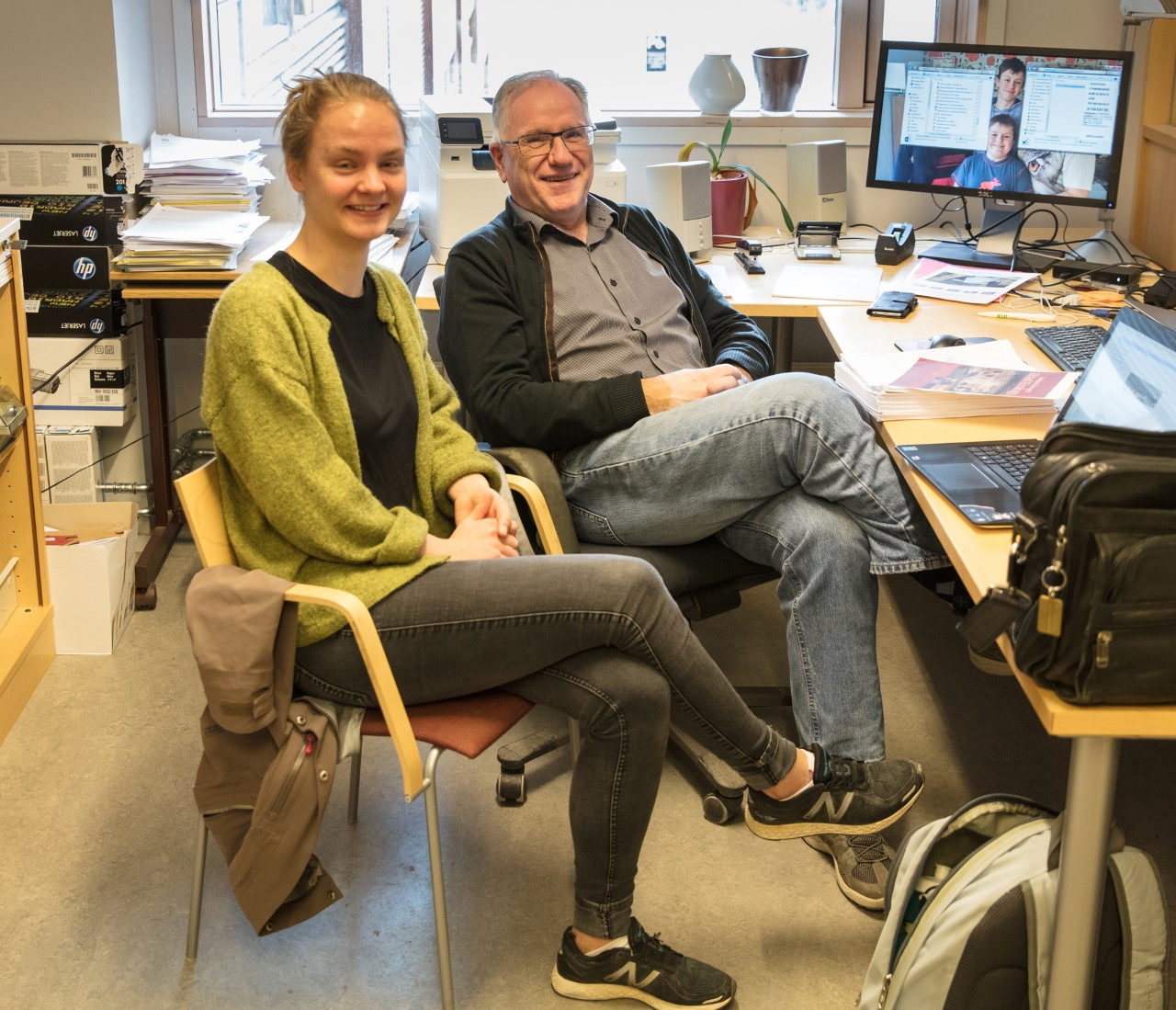 In Eivins office, a bit too early in the morning. Photo: Per Harald Olsen/AfricanBioServices

So, what I am doing here is having a two-day education program about ecosystems and ecosystem services in different villages in the areas of the Serengeti-Mara-ecosystem. All the way I am working together with people working with the AfricanBioServices-project called Community Facilitators. Community Facilitators (CFs) are the ones to have contact with the villages, and are important in the work of getting and giving information from and to the locals. In other words, the cooperation with the CFs is a major part of the whole program I am doing here. 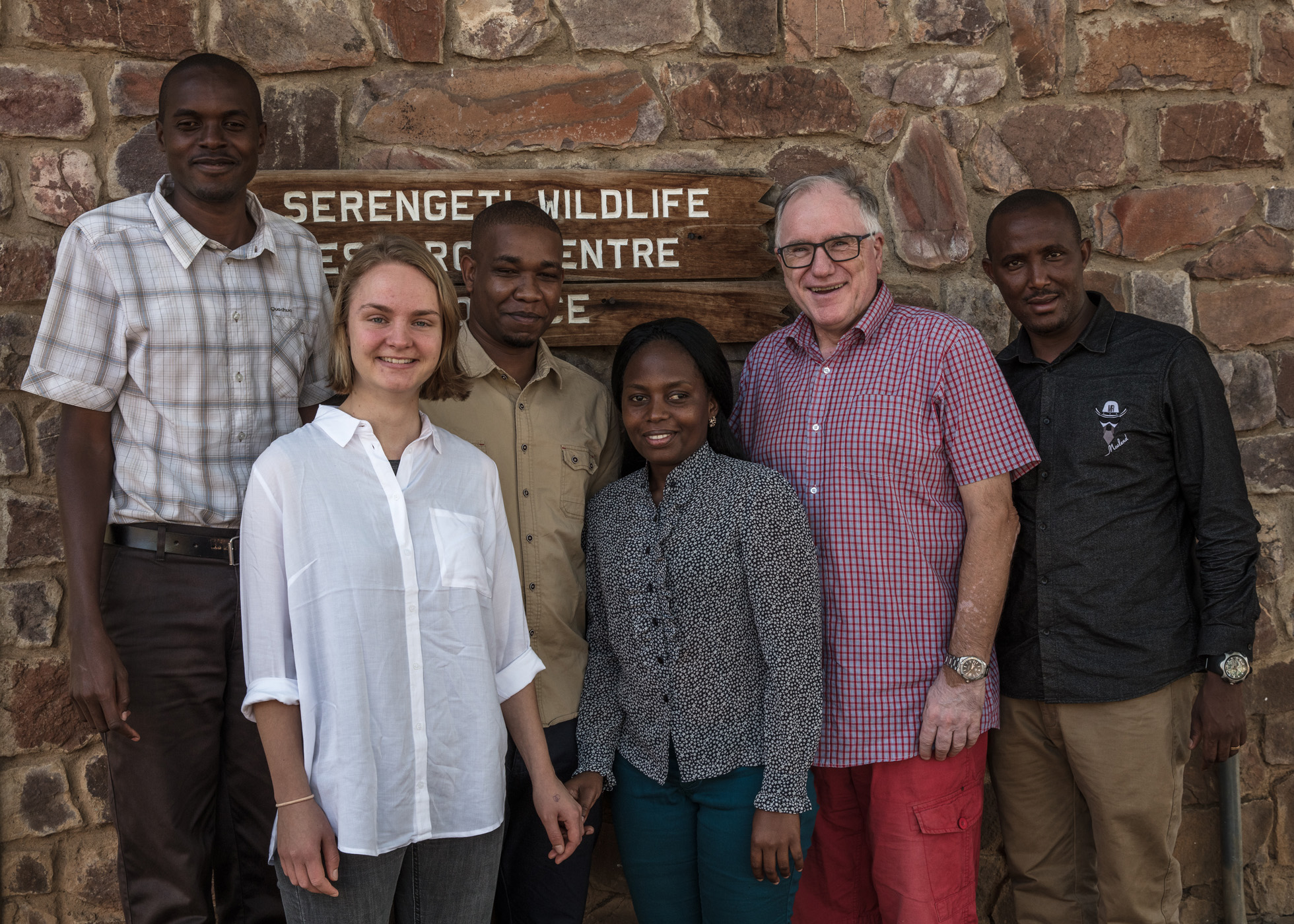 Before going to the different districts, I met with the community facilitators for a couple of days to plan everything about the program. From the left is Jeremia (CF in Serengeti), me, David (CF in Bariadi), Rose (CF in Meatu), Eivin and Elibariki (CF in Ngorongoro. Photo: Per Harald Olsen/AfricanBioServices

I am now in the Bariadi district. The first district we went to was Serengeti, then Meatu. In every district we go to two villages, and in each village there is 30 participants. In total, if everything goes according to the plan, 300 persons will attend. The CFs are arranging with location and people in every village, helping us to get around and have a place to stay, and also translating what I am saying in English to Swahili during the presentations.

So far, Tanzania has given a lot of different experiences. For one, in the villages in Tanzania, there is usually no electricity. Therefore, we are bringing along a generator to make it possible to use a projector for the power point, on which the whole program is more or less dependent. So when the generator stopped working during a presentation, things were looking quite dark. Luckily we found a very capable mechanic, and now the generator is working perfectly fine. 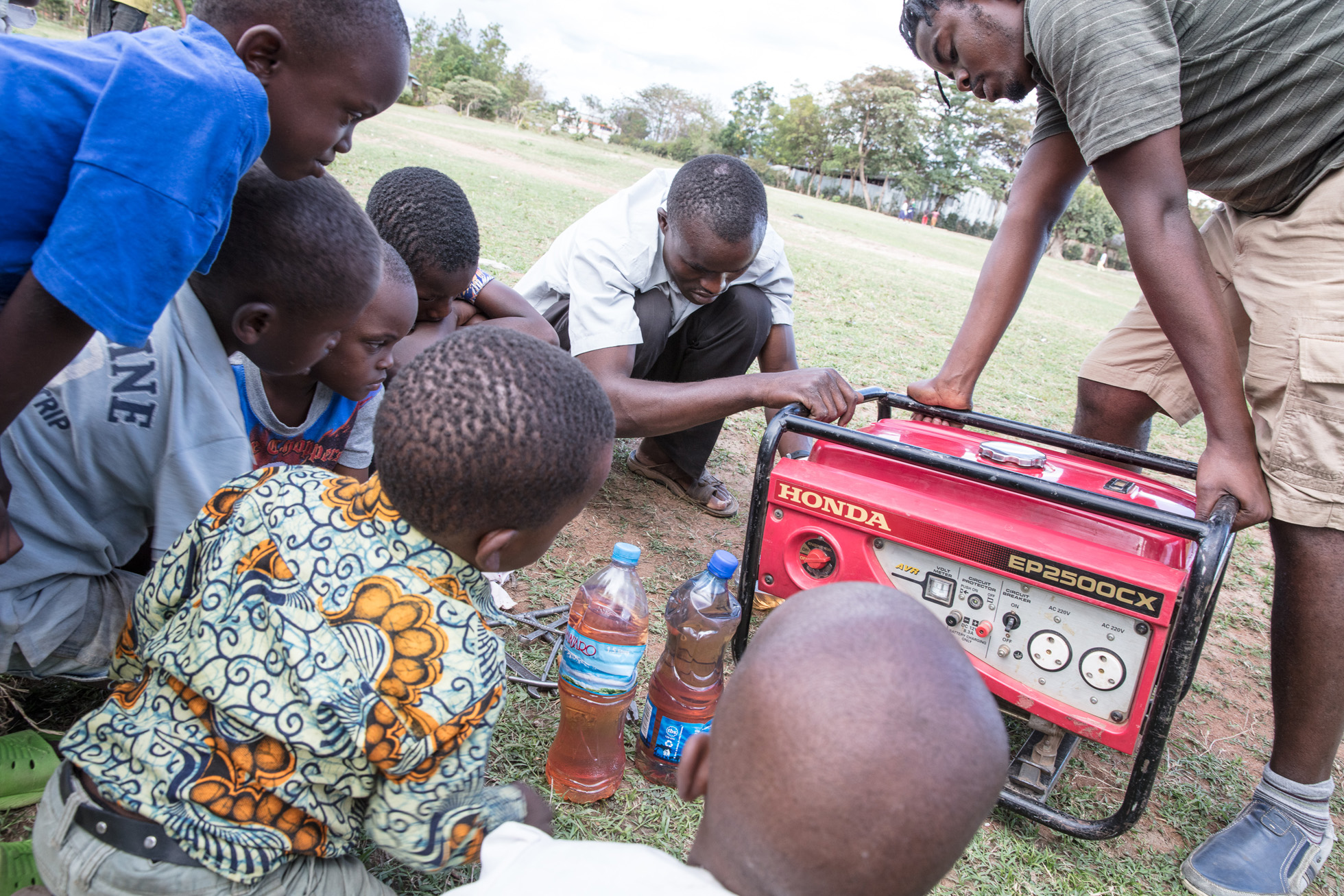 Even though his tools were quite simple, this mechanic fixed the generator without any major problem. A lot of the children in the neighbourhood were watching closely. Photo: Per Harald Olsen/AfricanBioServices

In the different villages, we also find different tribes. In Tanzania, as in most of Africa, people within one country still belongs to different tribes. In Tanzania, Sukuma is the largest tribe, being about 16% of the total population. This is also one of the tribes where it is common for men to be married to several women. In one village, one of the participants had six wives, and more than a hundred children (we were told). And still, he was quite interested in having me as his seventh wife. 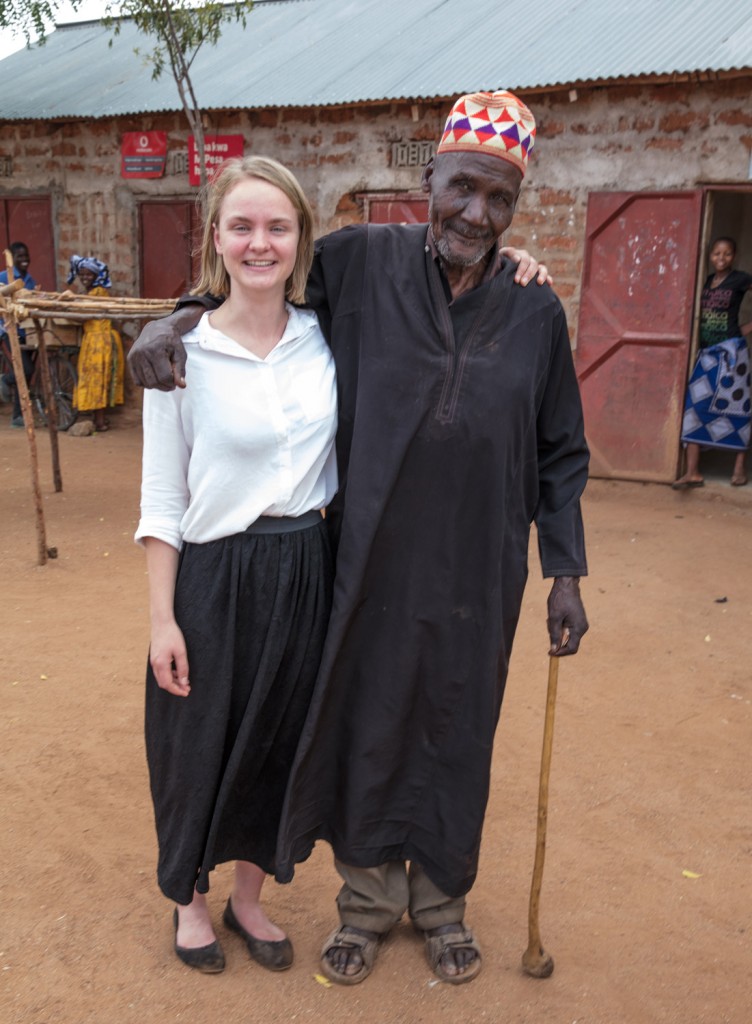 I was very lucky to have my first proposal ever here in Tanzania. Photo: Per Harald Olsen/AfricanBioServices

For many women in the villages, marriage is something that happen early, may be around 15-16 years of age. In the data so far gathered, many of the people who have ticked to be a woman, also have ticked standard 7 (primary) to be the highest completed education. Due to lack of money, many families get their daughter married instead of keeping them in school after this level. This way, the family is given a certain amount of for example cows from the man, which again is important for survival of the other family members.

In other words, life is hard on many of the people living here. Yet we are met with smiles, laugther and “karibu!” (welcome) everywhere we go. Many places, especially in the villages, people from other places in the world are not too common, and so we tend to draw quite some attention when coming there. Bringing equipment like the generator, the projector, cables and so on is not helping, and during the presentations, there is many curious persons watching from the outside. 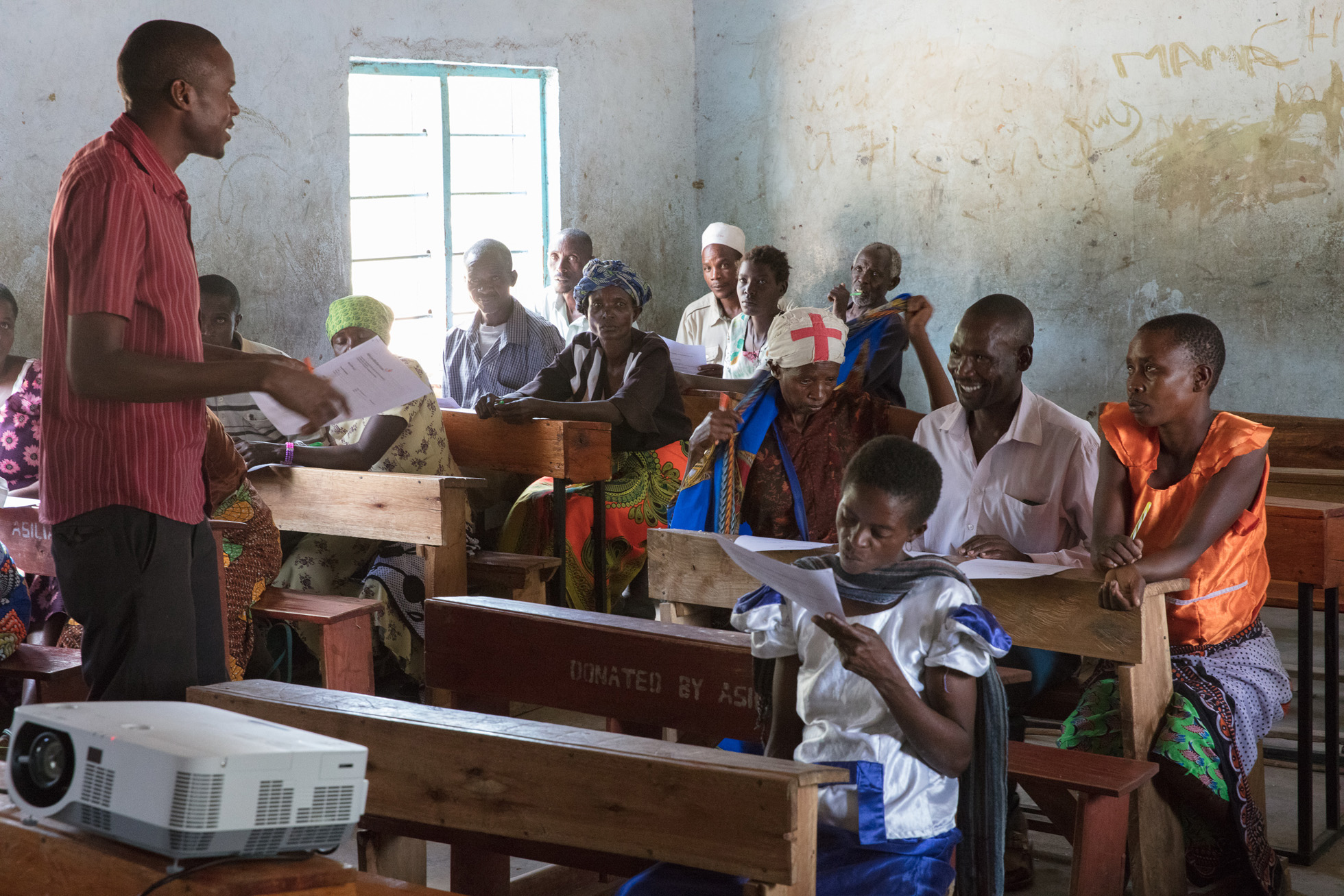 CF Jeremia in front of one of the groups in Serengeti district. Many of the participants needed much facilitating when filling the questionnaire, as they struggled with reading. Photo: Per Harald Olsen/AfricanBioServices

Regarding the experiences until now, I look very much forward to the weeks to come. Next up is people in the Masai-tribe, living in the districts of Loliondo and Mara.

Photos from my adventures in Tanzania

Back to the future – Using yesterday’s energy, today!

Is too much hydrogen bad? – Well in biogas, it may well be!

Deprecated: Function get_magic_quotes_gpc() is deprecated in /customers/e/7/e/ntnutechzone.no/httpd.www/wp-includes/formatting.php on line 2443

Reflection on my fieldwork as my journey draws...